Ezenwoko’s Blog reports that the Department of State Services (DSS) on Tuesday released Agu from its custody. The National President of the Actors Guild of Nigeria (AGN), Emeka Rollas, confirmed this in a statement made available to this platform today.

Recall that the Nigerian Army arrested Agu last week around Upper Iweka in Onitsha, Anambra State, for reportedly wearing a Biafra outfit while distributing bread and other items to the poor.

The actor was accused by the army of soliciting support for the outlawed Indigenous People of Biafra (IPOB).

Hours after Agu’s released from the DSS custody, Omokri in a post on a social media platform revealed that Nigerian lawyer and human rights activist, Mike Ozekhome, was instrumental in the release of the veteran.

Sharing a photo of Agu and Ozekhome, Omokri wrote: “Ever grateful to Mike Ozekhome for being instrumental to the release of Chiwetalu Agu after his unjust and illegal arrest by a repressive regime that celebrates Gumi for promoting terrorist and denigrates Agu for expressing his freedom of thought via his dressing.” 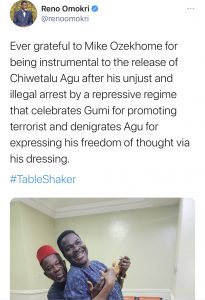