Nigerians seem not ready to let go of the controversy that followed the release of the sex tape of former Mavins Record signee, Tiwa Savage.

The leak of the sex tape last week had stirred reactions from fans, followers, and prominent Nigerians who were not pleased with the development.

The singer who shared a photo of herself wrote, “Charge that shit to the game n never speak on it again.”

The statement, however, has stirred reactions from Nigerians who feel she is not remorseful for the act which has been widely condemned.

Some of her fans in their comment were worried about the effect of this development on her son in the future.

Others, however, praised her for standing up to the game despite the backlash that followed the leak of the sex tape.

See screenshot of some reactions below: 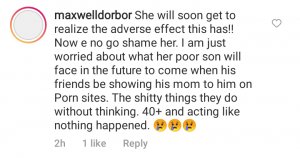