Two Niger State residents have been apprehended by the men of the Nigeria Police Force for allegedly assisting bandits with fuel.

Ezenwoko’s Blog understands that the suspects were arrested at a filling station in Minna, the state capital buying petroleum motor spirit (fuel) in Jerry cans.

The act is against the state government executive order as contained in a recent press release, banning the sale of petroleum products in large quantities in jerrycans or any other containers at filling stations in the state.

Governor Abubakar Sani Bello-led government had issued the directive to curtail the activities of terrorist bandits, Boko Haram and other criminal groups in the state.

Acting on a tip-off, the operatives of the State Police Command said it arrested one Umar Mohammed,51, suspected to be one of the fuel suppliers to bandits in the State.

The suspect was reportedly arrested alongside Adamu Atiku, 35, who is a fuel attendant of Muhabbat filling station in Bosso Estate in Minna.

Confirming the development in a statement made available to newsmen, spokesperson of the command, DSP Wasiu Abiodun, said: “On 3/10/2021 at about 1015hrs, acting on a tip-off, that some individuals were sighted buying petroleum product inside a 25-litre jerrycan at Muhabbat filling station, Tudun-Fulani Minna.

“Upon the receipt of the information, police operatives attached to Bosso Division swung into action and went to the filling station where one Umar Mohammed age 51yrs ‘m’, a fuel black market dealer of Gussassi village, and Adamu Atiku age 35yrs, a fuel attendant of Muhabbat filling station ‘m’ of Bosso Estate, Minna,”

“They were arrested with ten Jerry cans of 25 litres each, filled with petroleum product and a tricycle with Reg.No. RJA 444 WZ to convey the fuel to Gussassi village in Maikunkele area contrary to the Niger State Government Executive Order as contained in State Government press release dated 31st August 2021 banning the sale of petroleum product in large quantity in jerrycans or any other containers at filling station in the State.” 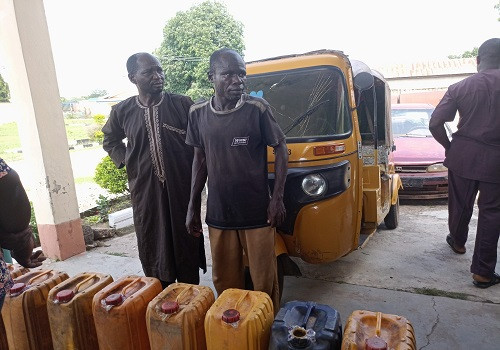 Ezenwoko’s Blog learnt that the suspects during interrogation, confessed to the crime while Umar Mohammed claimed that he sells the petroleum product to motorcycle operators at Gussassi village and its environs.

All suspects will be arraigned in court as soon as the investigation is concluded, the PPRO noted.