PHOTOS: Pretty Lady Lands In Jail For Attempting To Blackmail Her Client With Their S3x tape

A Twitter user named Engr Ibinabo has taken to micro-blogging to narrate how a slay queen was incarcerated for blackmailing her client.

According to Tweep, the lady (Name withheld) met her client on Facebook, met up with him and was paid.

Unknowingly to the client, the lady had recorded their activity and threatened to release it if he doesn’t pay sum of fifteen million which he declined.

He further revealed that the lady released the tape and was arrested by Department of State Services ( DSS) who charged to court thereafter.

“Dear Friends, If they blackmail you, send them to jail. Period. How Slay Queen landed herself in prison.

This lady met a man on Facebook. They chatted and agreed to meet in a hotel. They met and she was paid. Unknown to the man, she videoed him. She then used the video to blackmail him asking for N15million. He refused. She then spread the video on Facebook. He reported to the DSS. They arrested and charged her to court. Her bail alone is N5million plus landed property. This happened in Yenagoa, Bayelsa state. She has been taken to the Okaka prison. From Slay queen to inmate.” 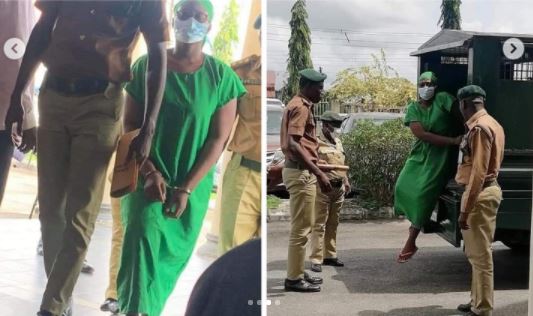