Many Nigerians who invested in Imagine Global Solutions Ltd have been left stranded as a couple identified as Bamise and Elizabeth running the firm has allegedly fled Nigeria with funds invested by thousands of customers.

The man, a former staff of Zenith bank, operates a micro-lending platform for small and medium-scale traders.

He collects money from investors, lends to the traders at 22percent interest then returns 10 per cent of the profit to investors monthly.

The lady runs a domestic staffing platform for hiring help.

For the past couple of months, investors have neither seen their money nor heard from them.

According to reports, the pair, Bamise and Elizabeth Ajetunmobi, reportedly went into hiding after squandering investors’ money said to be as much as N22 billion, according to social media accounts of investors.

Several victims on social media detailing how they lost between low five figures to as high as N500 million. A WhatsApp group has been created for those affected by the fraudulent scheme to pony resources towards recovering their investments.

Imagine Global, which was registered in 2017, stated on its website that it has a customer base of 90,000 Nigerians, but it was unclear how many of them were able to recoup their investments before the Ajetunmobis disappeared. The couple reportedly fled to London, where a branch of Imagine Global was incorporated in August 2019. 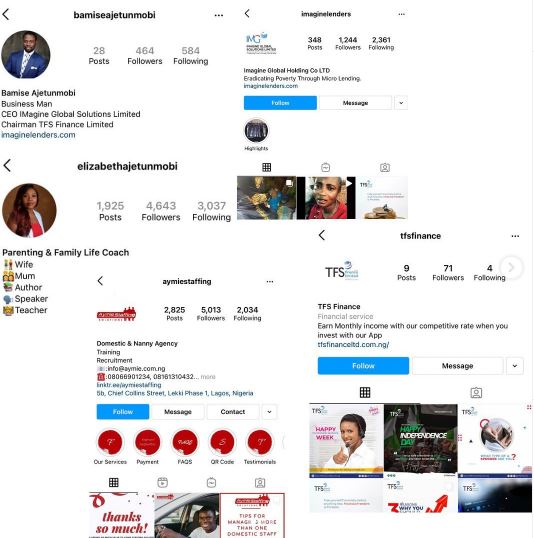