‘Why I Love Davido’ – Bobrisky Opens Up

According to the Nigerian male barbie, via his Snapchat, he noted that the singer has a good heart, one that is quite rare. He also added that people who have good hearts know themselves.

Sharing a photo of the singer on his snap chat, Bobrisky wrote; “I love him, have never met him before but he has a good heart. People with good heart know themselves. Just his personality o! Before some of you twist the whole write up now.” 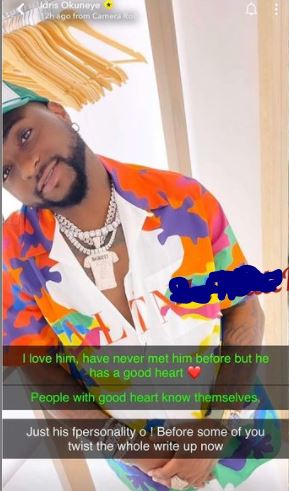 Bobrisky made the post via his Instagram handle and said that he spent a total of N1.5m on Mercy’s birthday adding that the sum was not enough. He said: “1.5million is not enough for you my lambo, If dis is fake life well I want more of it

. If you want to pepper ur enemies pls cal me

I will scatter that place with money”